The original route of US 271 is a mystery. It originally ran from Ft Smith, AR to Mena, AR via Poteau, OK. The routing north of Page was more or less along the modern routing of US 59 and 271. The mysterious part of the route is from Mena to Page. Let's see what the respective DOTs say. 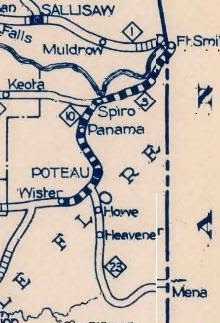 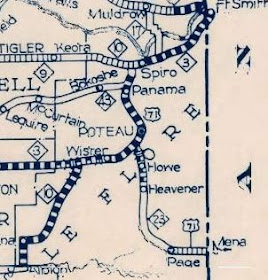 This map shows OK 23 duplexed with US 71. Obviously a mapo, or was there some sort of border war over US 71's route? It shows the road east of Page on the south side of Black Fork Mountain as being under construction.  On to 1928: 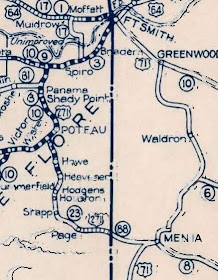 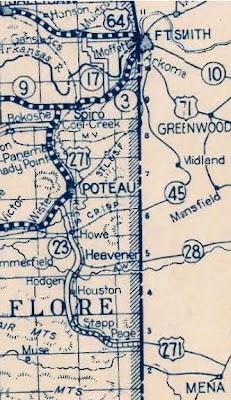 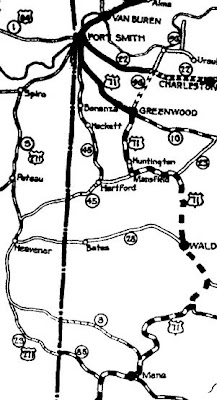 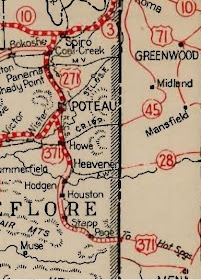 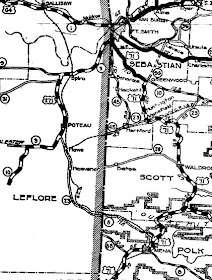 The Oklahoma map shows the highway from Poteau to Mena as US 371. Is this another mapo? It also shows the modern route of US 271 south of Poteau. The Arkansas map isn't very clear. One thing it is clear about is that AR 88 followed current CR 93. It does show OK 23 connecting with AR 8. On to 1931:

US 270 makes its first appearance. Note that the Wister-Heavener highway wasn't originally part of US 270.

Which routing of US 271 was correct? Did US 71 or 371 really ever exist in Oklahoma? Was there some sort of a a border war between Arkansas who wanted US 71 to run through Waldron and Mansfield and Oklahoma who wanted it to run through Heavener and Poteau? There are at least 3 possible termini of US 271 in Polk County: CR 188 at CR 76, CR 93 at old US 71, or Reine and Reeves in Mena. Per signage standards of the time, it could have been cosigned to end in downtown Mena.

US 71 found this map that shows US 271 following current US 59/270 south of Heavener. (Ignore the sloppy cartography typical of this era of mapmaking.) If this map is correct, then the endpoint of US 271 was at the junction of modern CR 76 and CR 188 near Acorn a few hundred yards from the pony truss bridge over the Ouachita River. 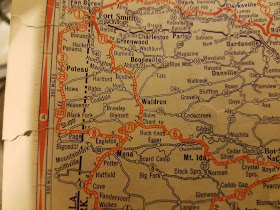 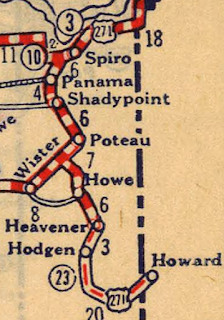 However, this map excerpt from the same 1927 Rand McNally road atlas shows US 271 coming into Arkansas near Howard and coming into Mena via modern AR 8. The problem here is that there is a huge mountain called Rich Mountain between modern US 59/270 and modern AR 8 (AR 88, the Talimena Drive, runs along the top of this mountain) and there is nor has there ever been a road that crossed Rich Mountain in this area. 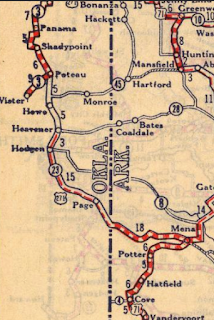 And this 1927 National Map Company map shows US 271 heading south from Heavener and around the north side of Black Fork Mountain then diagonally towards Acorn. 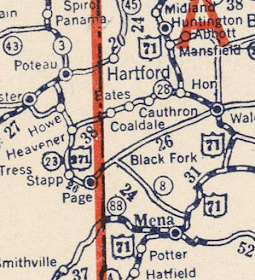 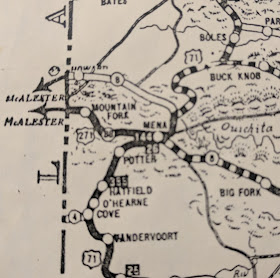 The next two excerpts are from a map of the Poteau River watershed from a report created by the US Engineer Office dated November 25, 1930 shows US 271 more or less following its current route while the highway from Poteau to Acorn was shown as US 371. It shows US 371 following modern US 59/270. Notably, it shows a US 371 shield in Arkansas. This map and the map above are the only two maps I've ever seen showing a US 371 in Oklahoma. The mystery thickens. 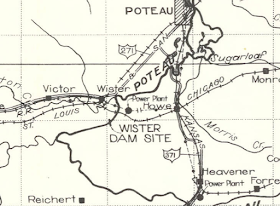 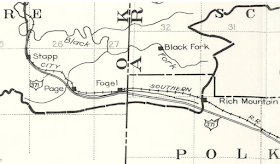 I don't know what to make of this one. It shows US 271 following modern US 59/270 from Heavener to Page and then heading northeast on the road that goes through Hicks, around the north side of Black Fork Mountain, through the community of Black Fork and meeting the modern alignment at Eagleton. Also note the presence of AR 8 west of Eagleton. There are roads that follow that routing today but they're narrow country roads that run through secluded parts of Oklahoma and Arkansas. This bridge is along that route. Seeing this map prompted me to reexamine some of my other maps, and noticed how OK 23 was routed just short of the state line. It is possible the road through Hicks was a state highway at one time, especially if the highway on the south side of Black Fork Mountain wasn't built yet. The bridges along US 59/270 east of Page were built in 1927, which supports this hypothesis. The routing through Hicks and Black Fork was likely never signed as US 271 but was possibly an early alignment of OK 23. 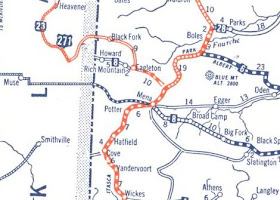