skip to main | skip to sidebar

The map below is from the 1963 Ouachita County AHTD map. It shows a proposed system of expressways in the city of Camden: 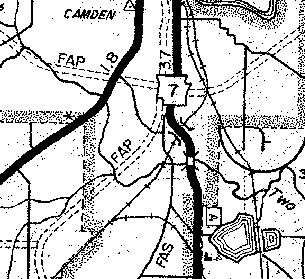 Some of these roads were built. The eastern portion of the US 79 expressway was built on a slightly different alignment and is a 4 lane expressway, complete with an awkward interchange with US 79B/US 278 (AR 4 was renumbered US 278 in the late 1990s) and more conventional interchanges at AR 7 and US 79 south but at-grades elsewhere. The AR 4/US 278 expressway was also built in a slightly different location than shown on the map. It was built with 2 lanes, but now about half of it has been upgraded to 4 lanes. The T intersection at US 278B/old US 278 is unfortunate, as WB traffic must stop and make a left hand turn to continue on the highway. US 278 has many stop signs in Arkansas.

The AR 7 expressway as shown on this map was never built. An AR 7 expressway was built on mostly new location from Camden to El Dorado, but it ties back into the old route just north of Tate. Existing AR 7 was upgraded to a surface arterial "expressway" north of this point to the US 79 expressway. The interesting part of this map is that it shows the relocated AR 7 extending all the way to downtown Camden. NOTE: the map legend labels the double-dotted line as "projected road" so any or all of these roads could possibly have been proposed as 2 lane surface roads.

Special thanks to Geostor for the historic map images.
Posted by yetti at 10:48 PM